Occasionally, I come across information about a mosaic linked to Salviati that turns out to be incorrect. This chancel mosaic happens to be such a misattribution.

Also known as the Church of St. Mary and St. Eanswythe, much of the 13th century building was rebuilt in the 19th century. R.C. Hussey rebuilt the nave and north aisle 1856-59, the south chancel aisle and transept were rebuilt in 1869, while Stallwood added the west window and porch in 1872. 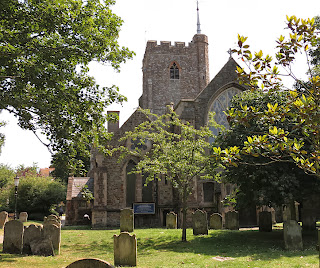 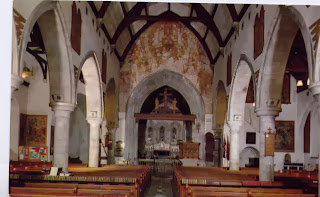 The chancel is lined with twelve trefoil topped mosaic panels depicting the Apostles, while a central panel shows five angels with an inscription on the base made in loving memory of Frederick Augustus Howe Fitz Gerald. Some sources have erroneously credited Carpenter with the mosaic work, while others have directly attributed it to Salviati. However, they were made by A. Cappello, an Italian mosaicist who at one point worked with the Salviati firm and used Salviati's techniques, but who ran his own workshop in London at the time he made these mosaics. 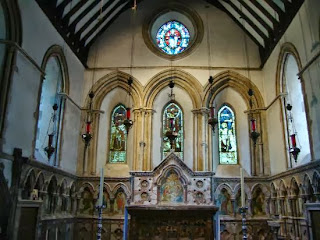