Ivan Rendic was a Croatian sculptor who studied in Italy - including in Venice - and later worked extensively out of Trieste. He made numerous funerary monuments in the cemeteries around Rijeka (including Kozala, Trsat-Susak, Opatija and Bakar), some of which Salviati also decorated with enamel mosaics. A catalog prepared for the 1893 World Columbian Exposition does not detail exactly which memorials Salviati worked on (and erroneously lists Trieste as the location of the cemeteries), but the following examples were all made by Rendic before 1893 and are embellished with mosaics. 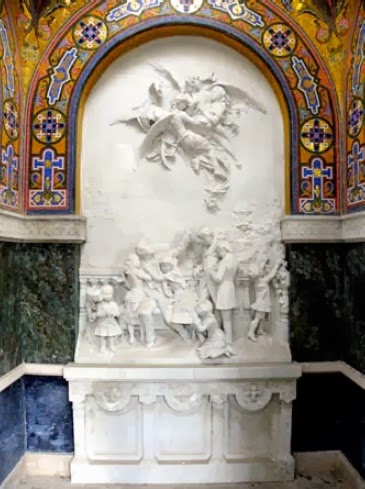 The interior of the Gorup family mausoleum from 1882 in Rijeka's Kozala cemetery. Josip Gorup had the memorial built after the death of his wife in childbirth, and the carved relief shows the separation of a mother from her eight children. 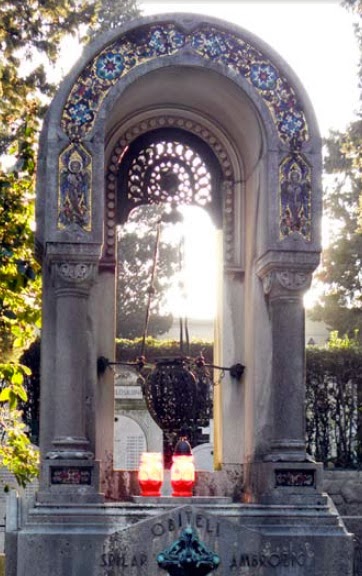 The Pilepic monument from 1890. 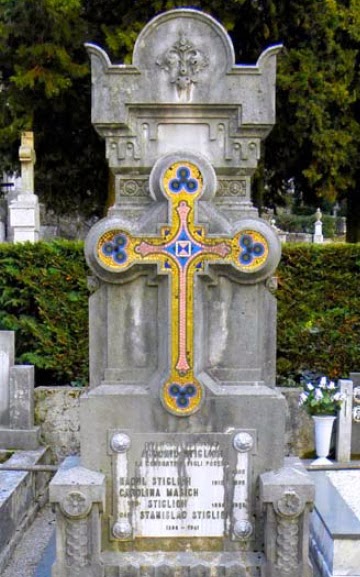 The Stiglich family tombstone from 1891. 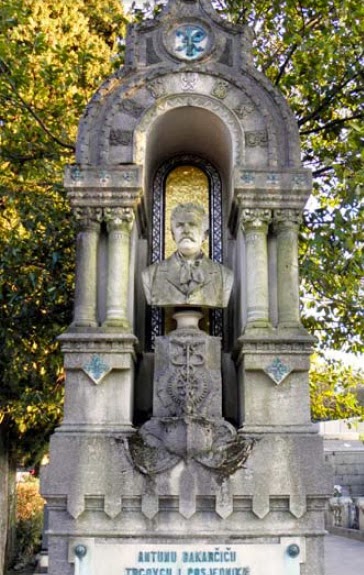 This Medieval church was reconstructed in 1867 by W.H. Knight of Cheltenham. 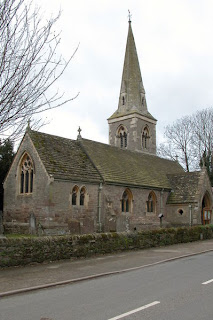 Salviati added the chancel wall mosaics of the "Heavenly Jerusalem" in 1887 after a commission by Harriet Evans, widow of Thomas Evans, owner of the nearby Morton Court.

Two architectural courts were designed by General Henry Scott in 1870 for the museum to house both cast reproductions of architectural elements, as well as some original pieces. The space opened in 1873. Salviati and Company made two mosaic reproductions that originally hung on the walls of the south-east Court.

The Good Shepherd is a copy of the lunette above the entrance of the Chapel of Galla Placida in Ravenna Italy originally from the 5th century. 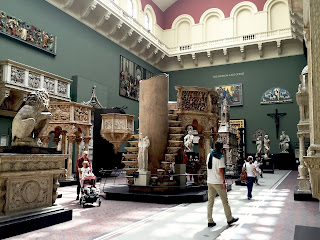 The Salviati mosaic lunette on top right in the Weston Cast Court, 2016. 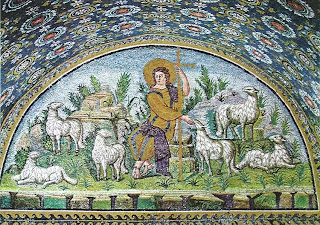 The original mosaic in Ravenna

The mosaic Figure of Christ is a copy from St. Mark's Basilica in Venice from the 13th century. It depicts the Savior giving a benediction (item 8036-1862), acquired by the museum in 1862 for 200BP, but which is now in storage. Salviati made another copy of a St. Mark's mosaic image of Christ for St. Augustine's College in Canterbury.

Sources:
The Victoria and Albert Museum
Appell, William. Christian Mosaic Pictures: A Catalogue of Reproductions of Christian Mosaics. London: South Kensington Museum, 1877. 17.
Wikimedia Commons
Film London
Metaphor
V& A Search.
Inventory of the Objects in the Art Division of the Museum at South Kensington, arranged According to the Dates of their Acquisition. Vol. 1. London : Printed by George E. Eyre and William Spottiswoode for H.M.S.O., 1868.
Posted by R.S. Kovach at 10:22 AM No comments: